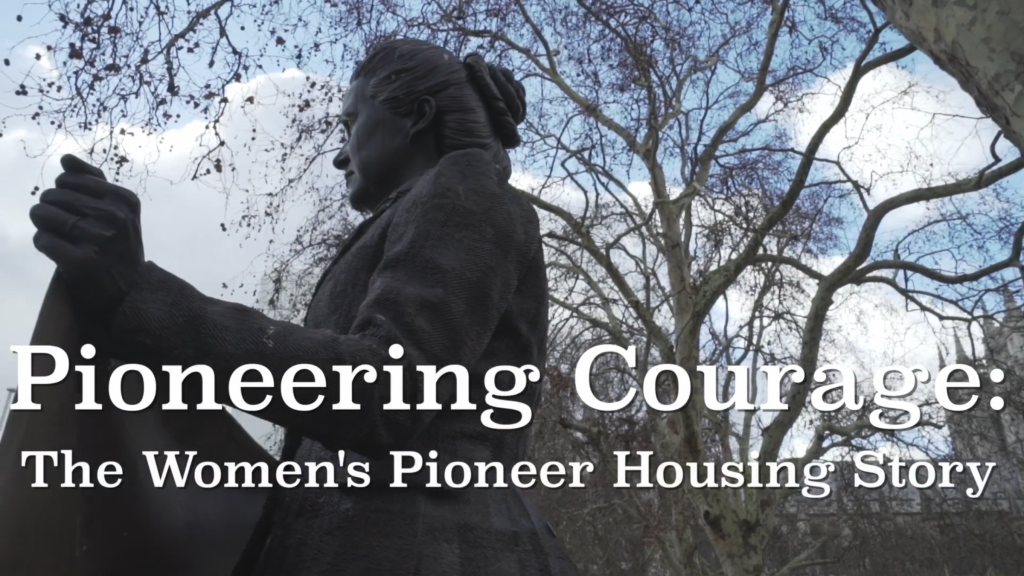 Women’s Pioneer Housing are delighted to announce that the film for our National Lottery Heritage Funded project Pioneering Courage: Housing and the Working Woman 1919 – 1939 is now live! View the film here: https://www.youtube.com/watch?v=mirkF9EP_F4

This Heritage Lottery Funded short film, produced by Chocolate Films, explores the history of Women’s Pioneer Housing, and the motivations of our high-profile suffragette and suffragist founders. It tells the story of the early years of Women’s Pioneer, how its growth was influenced by the values of its founders, and the impact affordable housing had on the lives of individual women.

Achieving voting rights for some women in 1918 was only the first step in advancing women’s equality. Women’s Pioneer Housing founders recognised that the vote would give women a voice to raise other issues. The film looks at the lives of some of our early tenants during the interwar period, and the ripple effect that a “home of one’s own” has – that access to secure and affordable housing was essential to enable women to achieve their ambitions to work or study and to live with greater personal freedom.

This film will be featured on Royal Holloway’s MOOC (Massive Online Open Courses).

Nearly 100 years on, women are still facing particular difficulties in finding secure and affordable housing. Women’s Pioneer Housing vision today is to make a positive difference to women’s lives. We have just under 1000 socially rented homes across London, with the purpose of giving independent women a springboard into achieving their potential.

Many thanks to the Heritage Lottery Fund, Chocolate Films and the London Metropolitan Archives for their support and advice.

Founded in 1920 by suffrage campaigners, Women’s Pioneer Housing is an independent, women’s-only housing association with a vision of making a positive difference to women’s lives.

We own and manage just under 1000 socially rented properties across London, with plans to grow by 15% over the next five years. We empower our residents to live independent lives, and support them in doing so.

Please address any queries to:

Chocolate Films was founded in 2001 with a simple goal: to create a high quality video production company with a clear social purpose. They are based in South London, and specialise in making documentaries and video content for businesses, charities, public sector bodies and cultural organisations.